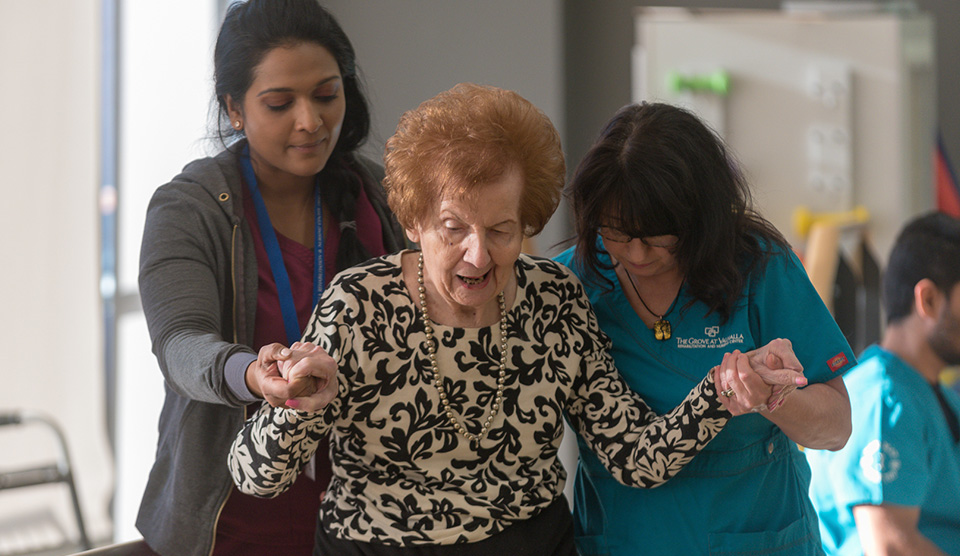 Urinary Tract Infections, commonly known as UTI’s are one of the most common infections, especially amongst the senior population. Women are more likely than men in contracting the infection. Symptoms can include infrequent or frequent urination, burning sensation while urinating, abdominal pains and muscle aches, to name a few. While most UTI’s can be treated with antibiotics and if addressed early on the treatment and recovery process can be quick (2-3 days). Unfortunately, Diana, is of the 20% that have recurring UTI’s. Her last UTI was not the non-serious UTI’s that she typically experiences.

On December 10, Diana was rushed to the emergency room by her daughter, Eva. The urinary infection she contracted was a “bad one”, requiring her to be hospitalized for a few days. Receiving the necessary treatment and ruling out the possibility of other contributing diagnoses, she was transferred to The Grove. Diana has been to our rehabilitation center two times in the past two years, for muscle weakness and difficulty in walking. Under better conditions would have been a preferred reunion, but we were happy to have the opportunity to care for and help her get back on her feet.

Diana returned to the same unit and nursing staff that had treated her in the past. She was warmly greeted by the familiar smiles and happy faces. Her immediate expression was, “Yes, it’s me, I’m back, and like before, I’ll recover.” Diana was in weak condition from her stay in the hospital coupled with her Parkinson’s disease. Prior to the hospital she required minimal supervision when ambulating. Now, she required maximum assistance with even the simpler tasks.

Diana, not surprising to the staff who knew her fighting spirit, was not disappointed or discouraged that she was in her third rodeo. The need to receive rehab services three times in two years seemed to inspire and push her to work even harder. Unlike her previous two stays here, which were respectively three months and over, Diana made a relatively fast recovery.

In the two months that she was here, Diana learned how to recognize signs of UTI, methods in preventing it and build the necessary strength to reduce further muscle aches. The nursing staff closely monitored and treated her infection and the rehab department helped her help herself get back on her feet. The friendly and supportive environment enabled her to feel confident about herself and her accomplished goal — returning home safely to her husband!