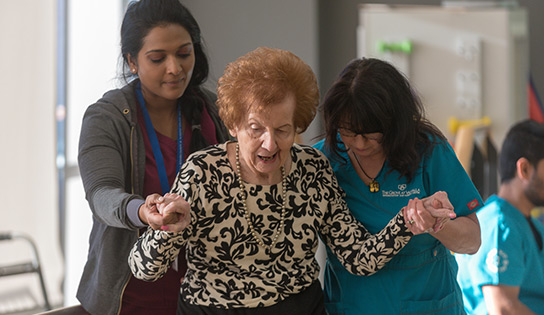 The short version of this story can be told as follows: the man fell, required hip surgery and regained his strength. From a clinical standpoint, that is correct, as it’s reported on his medical records. But healing isn’t isolated to the nuances of one’s hip and adjoining muscles. The individual’s emotional state, psychological strength and family and communal support systems are critical players in the recovery process just as the biological causes of a fall.

Ted is a retired IBM executive. A company he worked for starting from the day after he graduated from college. Commitment and excellence are practices he demonstrated his entire life. Two years ago, his wife, his partner of close to sixty years, died. Although his four children live in four different states, their commitment to each other and to their father is exemplary. Ted was physically active all his life, a strong squash player until the late age of 82.

On March 9th, Ted tripped in his large home. It was a bad fall. When 22 hours lapsed without hearing from their dad or being able to reach him, Wendy, his eldest daughter, went to check on him. He sustained a hip fracture. At White Plains Hospital, the surgery performed was a lateral hip replacement, where they enter from the front, as opposed to the more common posterior approach – from the back. The benefit of this approach is the reduced chance for the hip to dislocate, but the process for recovery is longer, with more hip precautions.

Ted’s initial 24 hours at The Grove went smoothly. He was recovering from the surgery and surrounded by his family. A day later he had an awakening, “I’m in a nursing home for rehab, what is this place? I’ve never been in this environment before.” The staff succeeded in helping Ted adjust and make him feel as comfortable and at home as possible. He appreciated the attentive and concerned response from the staff, but it was a major adjustment for him, both emotionally and physically.

Claire, PT and Kaitlyn, OT, were his assigned therapists. The rehab phase consisted of building the leg muscles by contracting the muscles in the leg without moving the hips and glutes. Much of these exercises took place in his room. Ted was in a lot of pain. A week in, he was able to continue his exercise and muscle strengthening in the gym. His pain was still severe which prevented him from putting any weight on his legs. Through the exercises and pain management, the pain eventually reduced, which then allowed him to sit up on the edge of his bed, transfer out of bed and increase his independence.

Ted’s ability to perform more arduous exercises increased, as his endurance level increased and his pain reduced. He was able to remain on the bike for longer periods and began ambulating. His competitive and resilient character began to shine. Observing the progress he was making encouraged and gave him the confidence to continue exercising outside his sessions. Ted would perform exercises in his room and was encouraged to ambulate and transfer independently. Ted’s athletic history helped him recover faster. After three weeks he was able to begin walking longer distances and his endurance level continued to rise.

There was much going on in Ted’s life as his hip was healing and his lower body was becoming stronger. It became apparent that living alone was not the healthiest option for him. Although reluctant at first, and understandably, the discussion of moving to an assisted living was introduced. This was even a greater challenge and accomplishment on his end than recovering from a hip replacement. His entire life, Ted was the provider, the leader. He led a very successful life both at work and at home. The manner in which he recognized his limitations and the inevitable process of aging was impressive. He was stoic and realistic.

His time at The Grove prepared him for his next phase in life. As he became more physically independent, he began befriending and socializing with some of the other patients. He appreciated the sense of community and camaraderie that was offered. He visited the Bristal Assisted Living during his stay with us. He enjoyed what he saw, but most importantly, they allowed him to bring his piano. Ted is an incredible pianist, an activity he enjoyed throughout his stay at The Grove, not to mention the appreciation of all the staff and patients he performed for. Shy by nature, he wasn’t searching for the attention. The relationships and connections his playing created between him and others strengthened his interest in choosing to live in a community as opposed to living alone.

Ted’s story exemplifies the healing that can only come from the community. Beginning with his devoted children to the committed staff at White Plains Hospital, The Grove, and now at The Bristal, all were happily and positively helping Ted find the meaning and healing that can be found in aging.